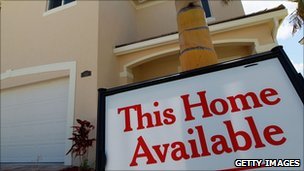 The pace of sales remains slow

New home sales in the US rose sharply in June compared with the previous month, but the pace of sales was the second slowest on record, official figures show.  The Commerce Department said sales rose to an annual rate of 330,000 in June from a revised 267,000 in May, which had been the worst month on record.

June’s figure was the second-lowest rate since records began in 1963.

The housing market has suffered since tax credits for buyers ended in April.

Analysts say that the uncertainty over the US economy – including unemployment at about 9.5% and tight credit conditions – have left potential buyers reluctant to commit to a new home. “There’s no question that this is a weak number, but it seems to be more stable,” said Stuart Hoffman, chief economist at PNC Financial Services Group.

“The bottom line to all of this is that we need more jobs.”

Sales saw their peak annual rate of 1.39 million in July 2005.  New homes sales made up about 7% of the housing market last year – though this figure was about 15% before the collapse of the housing market. Knock-on effects of low sales include fewer jobs in the construction industry.

According to the National Association of Home Builders, each new home built creates an average of three jobs for a year and generates about $90,000 in taxes.